There are over seven billion people in the world, and nearly 4.7 billion of them are mobile users. Stats also show that 90% of mobile time is spent on applications.

So you may be wondering what kinds of applications (or features) are on the rise. Here’s a peek at consumer demand that we’ve been observing over the past few months in mobile app development:

The mobile app owners who consistently meet consumer demand are going to increase their odds of success. It’ll give them an opportunity to get a share of the growing app market.

To give you some perspective, the mobile app development revenue is expected to soar to $581.9 billion this year. This is a $120-billion increase compared to 2019. 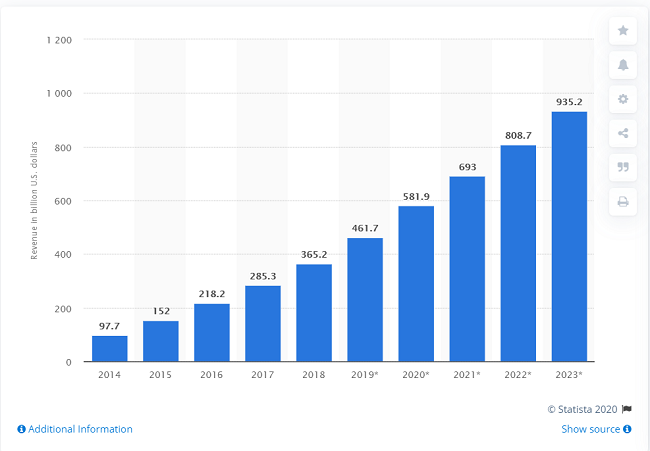 What led to this success? Were there any top mobile development trends that broke barriers in creativity in 2019?

In fact, there weren’t many game-changers. What we witnessed was technology enhancement. You can say the focus was on evolving what was already on the marketplace – not so much on revolutionizing it.

This resulted in the rampant production of known technologies, such as artificial intelligence and augmented (or virtual) reality. As a result, we have more stable apps that deliver exceptional quality and experiences.

The number of people searching for information on Stack Overflow is on the rise, with almost 10% of threads regarding mobile. 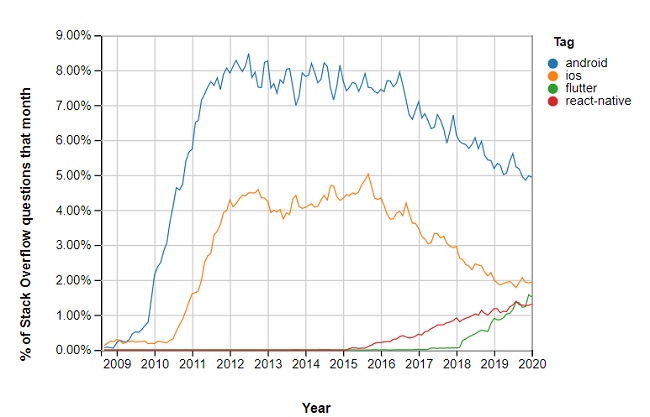 Here’s a look at a detailed comparison of technologies which have trended over time based on use of their tags since 2008, when Stack Overflow was founded:

This also sheds some light on the current state of the app market. The question now is:

What will be the top mobile app development trends in 2020?

Curious to know about mobile app development predictions for the nearest future?

Then let’s take a look at what we expect to see in mobile app development in 2020.

The focus on artificial intelligence and machine learning will continue to be a priority in app development. Both businesses and consumers are adopting AI tools to make their work and lives easier.

So what will change on the machine learning front?

Deep learning will also make an impact on AI by analyzing users’ daily routines and activities. The system will learn the needs of a user based on the data it gathers over time to improve the user experience (i.e. making recommendations).

Excellent examples of machine-learning capable apps include Siri, Alexa, and Google Assistant. They’re being optimized for better voice and face recognition and are capable of doing much more – for instance, ordering a takeout for you, scheduling appointments with a live person, or adding an event to your Google Calendar.

Another example of a mobile app with machine learning algorithm is Baby Guard (or AI nanny). The app can be installed on two phones so that you can see your baby on camera. Thanks to the voice recognition algorithm, you’ll receive a notification when your baby cries straight away. Since the app can recognize what is a baby cry and what’s not, you won’t have to worry about random noises in the nursery sending false alerts.

We are seeing a major shift towards wearables. Smartwatches are widely known for helping with weight loss and fitness training goals. And they’re not limited to just monitoring your heart rate. They can also check other parameters and even report them to your health apps.

This enables users to keep a better watch of their health, especially when they’re battling a condition. Coupling mobile apps with smart devices – such as scales, fitness equipment, and weights (with a gyroscope and Bluetooth connection) – enables users to receive a complete analysis of their well-being.

What makes wearables an ideal target for app developers is the power they wield. The processors, batteries, and memory installed give devices higher performance and functionality to handle powerful apps. Users can now get a complete experience with wearables without the need for their smartphone.

Once every few years, we witness massive leaps in Internet connection speeds. We’ve come a long way from dialup and are presently spoiled with download rates as high as 1,000 Mbps.

Now, we’re seeing a rapid adoption of 5G networks across the world, which will bring even faster connection speeds to mobile devices. It’s said to be 20x faster than 4G LTE, which can peak at 1 GB per second. 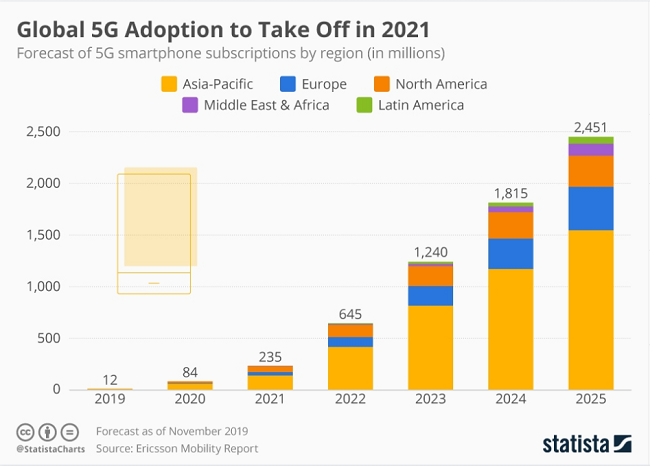 This means better online connectivity between devices. But it’s not just going to make online communications better – 5G also enables you to control drones in a more effective manner.

Companies like Manna and Valqari are already taking advantage of this by offering drone deliveries as a service. This is used by restaurants and businesses to deliver food and packages to customers.

5G also boasts being more secure than 3G and 4G networks, which is a major concern in the age of big data (and even bigger data breaches).

With the speed and reliability it offers, it’ll make devices powerful enough for resource-expensive VR and AR app games. Just in time for the next trend…

The advances in augmented reality (aka virtual reality) have been quite impressive. Thanks to the upgrades in ARKit (iOS) and ARCore (Android), you’re able to place AR objects behind and in front of real objects in real time.

This comes in handy when you’re using, for example, an interior design app: you can see how a particular piece of furniture would fit in your room using your smartphone camera.

This made it possible for brands like Ikea to develop interior design apps for customers. Bosch also has a similar (albeit more complex) app, which allows you to create simplified sketches of floor plans quickly.

The Heritage App is another remarkable VR app that lets you use filters to paint over reality. You can use this feature to see the world through the eyes of renowned painters (like Picasso, Van Gogh, and Munch).

The technology behind VR/AR has definitely matured, offering better optimization and stability for these apps. So it’s likely to encourage more entrepreneurs to create more virtual reality apps.

5. IoT Will Continue to Be Used to Create Smart Homes

People aren’t just using smart devices, they’re living with them. Thanks to Google Home and Apple Home, consumers can transform their residences into smart homes. This is possible by using devices compatible with Google and Apple. It’s going beyond smart thermostats and refrigerators. You can find all sorts of appliances now connected to the Internet, including air purifiers, pet feeders, lamps, and blinds.

And Google and Apple aren’t done yet — they’re committed to supporting more devices in the near future.

6. Apps Will Operate Across Multiple Platforms

What works on Android won’t necessarily work on iOS. This is why you have two separate app marketplaces. However, this doesn’t mean that creating an application that works on multiple devices is impossible.

And we’re not just talking smartphones and tablets, but desktops as well.

This is what we’re seeing with JetBrains’ Kotlin multi-platform projects. You can use a single language like Kotlin to develop applications for all three platforms. Developers can write code for every part of the system: backend, frontend, mobile apps, and desktop apps.

Facebook was one of the first to join this trend with its React Native platform. React Native allows developers to write mobile apps for iOS and Android using a single codebase. It’s written in JavaScript, but rendered in native code.

Flutter is another platform enabling developers to create apps for mobile, web, and desktop using a single codebase written in Dart. Although it’s still young, it’s gaining a lot of traction.

What makes the future promising for these cross-platform solutions is that they’re backed by major companies like Google, JetBrains, and Facebook. And with their commitment to continued development, we can expect to see rampant improvements in the coming years.

7. Hardware Will Play a Role in Mobile App Development

Without proper inner workings, apps won’t be able to perform as optimally as they do today.

Over the years, we’ve seen smartphones, wearables, and tablets advance in speed, storage, and overall capabilities, thanks to their hardware.

So what effect will hardware have on mobile app trends?

The shape of devices will remain the same (sleek, large screens). However, the hardware used inside of them will come with better parameters, such as more RAM, more storage space, and faster processors.

We’ll also see upgrades in battery life and photo capabilities. Users will be able to go longer in between charges and capture stunning videos and photos.

So what are the major trends you should be on the lookout for in 2020?

The one to pay the most attention to is the progression of technology. As hardware gets better, developers will continue to enhance and improve their apps.

This will lead to the continued evolution of the app marketplace, which will enhance the maturity of mobile apps and ensure greater user experiences.

Any cookies that may not be particularly necessary for the website to function and is used specifically to collect user personal data via analytics, ads, other embedded contents are termed as non-necessary cookies. It is mandatory to procure user consent prior to running these cookies on your website.